It has been quite a 4 months since I have been crowned. I have gotten to meet people that I would never have met, and I am hoping that I have changed some outlooks on the way that disabilities are seen.

Delaney and I attended Challenge Games, a track and field events for young people with disabilities, in Derby, Kansas where she competed (and did great!). I got to see children with a variety of disabilities run and bike their little hearts out. They smiled the entire day, no matter how tired they were. They laughed and played with their friends. They were just being kids.

I have to say that Challenge Games was so inspiring (I actually hate that word) for me.

Children with disabilities make me look at life in a whole new way, maybe because I acquired my disability later. They don’t care about anything,e except wanting to be a peer, and they carry themselves as just themselves. They don’t worry as much about stereotypes and judgments as adults do. To me, that is what strength is.

We also attended the SACK Conference at the Ramada Inn. If you don’t know about SACK, it is the Self Advocate Coalition of Kansas, and they are real fire-starters. Stephanie Sanford was one of the women I met during the Ms Wheelchair Kansas pageant weekend in March, and she is one of those people who get you fired up about life and advocacy and doing what is right. Definitely role model material for anyone wanting to advocate for themselves or someone else. 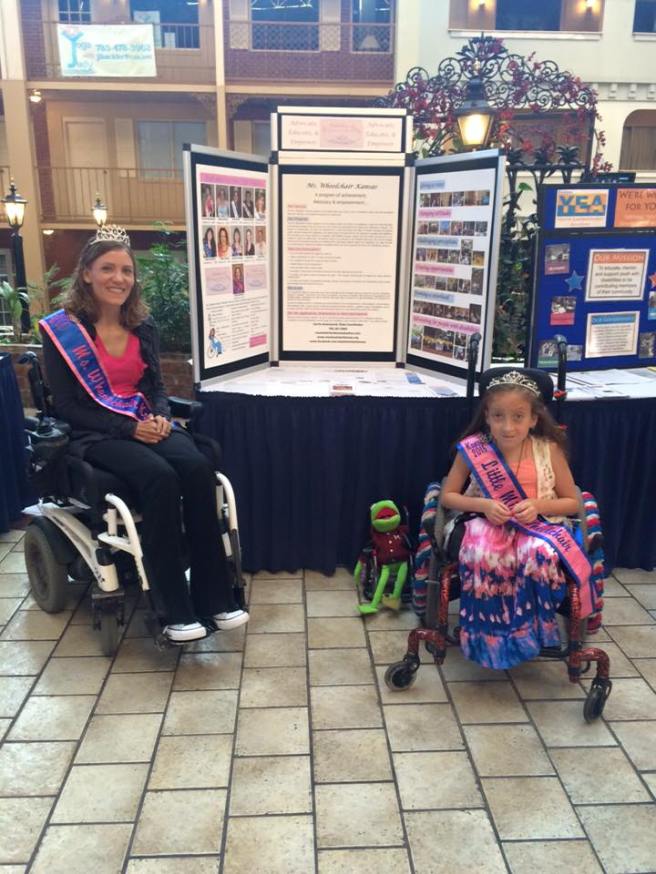 I attended The KC Diamond Softball Tournament in Topeka, where I threw out the first pitch against the Nebraska Red Barons. Actually, I threw the first pitch 4 times because cameras weren’t working properly. Haha. It was fun to watch the guys get so competitive! It was hot, and they just kept on going, sun and heat and all.

Then Nationals came along. I have a whole different post to tell about my week in Des Moines, but I will say that I have 24+ new friends who have the same goal as me: to advocate and empower women/people with disabilities. If anyone ever, ever has a chance in life to meet with and discuss issues with and bond with people who have very similar circumstances as you: DO IT. You will not regret it. You will be lifted up and motivated. Do it.